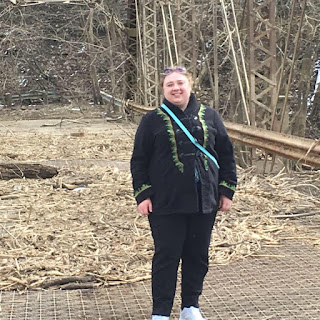 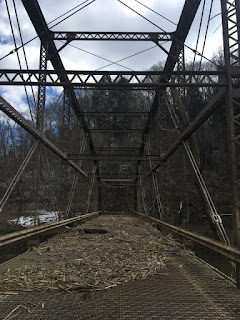 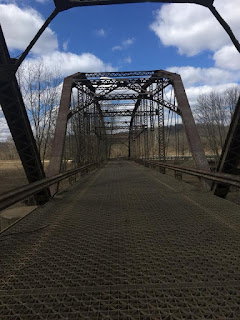 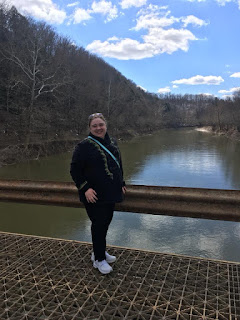 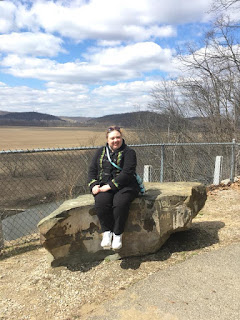 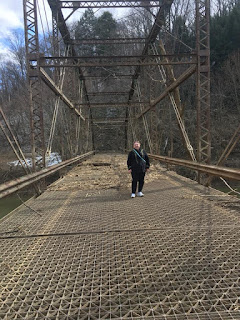 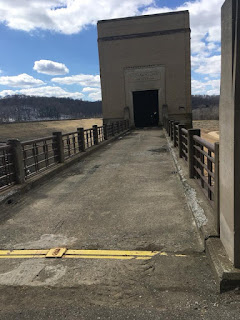 Went to some really awesome places with my friend Colleen today she took me to her hometown and gave me a tour this
bridge was built in like the 1900 or so she when this bridge was working she would drive on it two cars could drive on it and when It was snowing you just slide right on down she would ride the school bus on this bridge too even when the water was high it was cool to see and learn about the history.

The dame was built on 1935 her grandpa helped build this bridge and people go rock climbing down this and you can see the farm her grandpa owns it was really cool you should check out my videos and her and learn the cool history about it.

I love seeing old bridges and learning about all the historical places that are in Ohio and we have been to quite a few we have lived in Mount Vernon Ohio and they had a lot of historical brides too we went on one there before and went under the bridge too they also had a really old historical glass factory there that used to make glass they turned it into a park called Ariel foundation park you can go up this really cool tower that used to be the chimney that you can climb that they restored.
they had different parts the factory that was still there that you could look at and a walking trail there people get married there and get their pictures there it a fun tourist area.

Mount Vernon had a lot of beautiful historical landmarks
Mount Vernon is the county seat of Knox County, Ohio. Established in 1805, residents named the town after George Washington's home, which was also known as Mount Vernon. During the town's early years, residents congregated in the town on Saturday afternoons and helped clear stumps of trees from the city streets. Following several hours of hard work, residents then concocted an alcoholic drink to applaud themselves.
Mount Vernon grew quickly, having a population of 2,363 people in 1840. By 1846, the town contained eight churches, thirty-three stores, three newspaper offices, one woolen mill, four gristmills, and five sawmills. In 1880, 5,249 people resided in Mount Vernon. Four newspaper offices provided news to locals, and the town also contained ten churches and three banks. Numerous manufacturing businesses existed in the town, with C&G Cooper, a sawmill company, being the largest, employing 190 residents. Most businesses provided services of manufactured goods for farmers in the surrounding countryside.
found this information on google you can read more on their website http://www.ohiohistorycentral.org/w/Mount_Vernon,_Ohio

they also had a lot of old roads too they were very cool to see and look at Mount Vernon Ohio is beautiful for there historical landmarks like bridges and road old churches and so much more.

We also lived in Troy Ohio
Troy was named after the ancient Greek city of Troy, according to the Ohio History Connection. Established in 1808, the community is the county seat for Miami County. 2. ... Today, the Overfield Tavern, Troy's oldest surviving building, is a museum. They also had many wonderful history museum and shops and roads and much more.
you can read more on their website https://www.mydaytondailynews.com/news/local/pieces-troy-history-that-will-make-you-fall-love-with-this-gem/ICcnm2EP4IdzCt2GACVZlK/
found this information on google

We also lived in New Philadelphia Ohio The City of New Philadelphia is Rich in History. In 1804, John Knisely founded our town just west of the site of Schoenbrunn, a Moravian Indian missionary town and the first Christian town in Ohio. Taverns and merchants thrived here as the village was a focal point for travelers and settlers from the east.  With the construction of the Ohio-Erie Canal, New Philadelphia became a marketing center for agricultural products and the canal provided water power for mills. The coming of railroads led to coal mining and, eventually, to steel and manufacturing.
Found this awesome information on google.
you can read more on the new Philadelphia website
http://www.newphilaoh.com/History-of-New-Phila