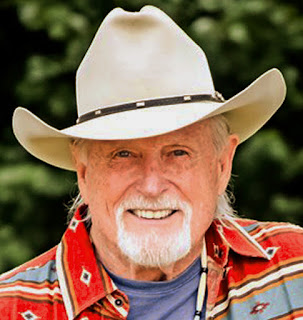 1. Tell me about yourself?
Ken Farmer didn't write his first full novel until he was sixty-nine years of age. He often wonders what the hell took him so long. At age seventy-nine…he's currently working on novel number thirty-seven.
Ken spent thirty years raising cattle and quarter horses in Texas and forty-five years as a professional actor (after a stint in the Marine Corps). Those years gave him a background for storytelling…or as he has been known to say, "I've always been a bit of a bull---t artist, so writing novels kind of came naturally once it occurred to me I could put my stories down on paper."
Ken's writing style has been likened to a combination of Louis L'Amour and Terry C. Johnston with an occasional Hitchcockian twist…now that's a combination. He doesn't write any sex scenes or foul language. Writers resort to vulgarity when they aren't capable of wit.
In addition to his love for writing fiction, he likes to teach acting, voice-over, and writing workshops. His favorite expression is: "Just tell the damn story."
Writing has become Ken's second life: he has been a Marine, played collegiate football, been a Texas wildcatter, cattle and horse rancher, professional film and TV actor and director, and now…a novelist. Who knew?
Ken Farmer's dialogue flows like a beautiful western river…it's the gold standard…Carole Beers
2.What are your favorite books to read?
I'm fairly eclectic, but mostly read Edgar Rice Burroughs, Good westerns without foul language, and Some SYFY.
3. When did you decide you were going to write a book?
At the age of 69. I retired from film/TV acting and my creative urge was still driving. A friend of mine from the Marine Corps sent me a novel he wrote asking if I could adapt it to a screenplay. I did and after I finished, it hit me...I can write a novel. That was .thirty-seven novels ago...all in a little less than 10 years.
4. How did you come up with the name of your book?
Instinct. I always do the title first, then the characters, then the story. I'm a pantser...I let the characters tell the story, I watch, listen, and then just write it down. My latest, THREE CREEKS is loosely based on my childhood and is classified as a 1940s Southern Noir Mystery through the eyes of an eight-year-old boy. Think To Kill a Mockingbird without the foul language. It's my first foray into the genre and in the first person. All my previous novels have been Military action, Historical fiction western, Police procedural mystery and a couple of Syfy.
5. What are you working on for 2021
A sequel to my latest release...THREE CREEKS, entitled RED HILL ROAD. I've also started book #6 of my Historical Western series, Silke Justice, entitled DALIA MARRH. THREE CREEKS went live on Sept. 19, 2020.
6. How long have you been writing?
Novels, about 10 years. Before that, like most actors, I wrote screen and teleplays. Started teaching acting and my students asked if I could write a book on the style of acting I was teaching, so I did. I wrote ACTING IS STORYTELLING in '96...a non-fiction how-to.
7.What advice would you give other authors?
Learn your craft, write, write, write and read, read, read. A writer learns to write by writing.
8. Where can people find you online?
I'm on Amazon in Kindle, Print, and Audio.
9. What is your favorite coffee drink?
Black coffee.
10. What is your favorite coffee shop?
Home
11. Do you plan on making a new book in the future?
I write 4 to 5 novels per year.
12. How many books have you written?
37 and counting
13. Did you go to college to be a writer?
No.
My sites:
www.tinyurl.com/KFarmerAudio
The Nations - Classic Western novel Winner - Laramie Award 2014
Haunted Falls - Historical Western novel - Winner - Laramie Award - 2013
www.TimberCreekPress.net
Book Trailer - https://vimeo.com/109625264
http://tinyurl.com/KenFarmerAmazon
FaceBook:
www.facebook.com/KenFarmerAuthor
Ken's VO Demo:
https://soundcloud.com/ken-farmer-1/ken-farmer-vo-demo
Member Western Fictioneers